Cusco
When we got up in the late morning, after last night's adventure, we remembered that we forgot to take back our gloves that Angela borrowed from us. We assumed that our travel agency would have a list of our group's members. When we got to the agency, we realized it wouldn't be an easy task to track Angela. In 4 other agencies that organized our group, we asked for Angela and no one could help us, until we got to Havitush, which was her agency. They gave us the phone number of her previous lodging place. The man on the phone directed us to another hostel to where he knew she was heading, but the address he gave us was wrong. After walking in the nearby streets, we accidentally saw a very small sign leading to her hostel. There we found Angela with Esthel, her friend who was also in our group, sitting on the roof and enjoying the view. They were very surprised that we managed to find them, but still happy to see us. 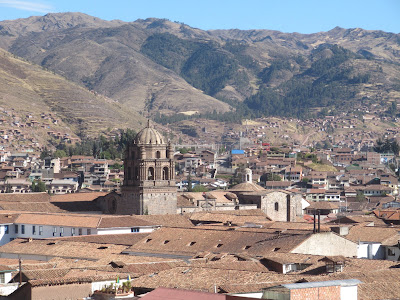 After half a day of searching we got our gloves back, and went to look for a restaurant. Luckily, we found the best vegetarian restaurant in Cusco, El Encuentro (Santa Catalina Ancha 384, restaurantelencuentro.blogspot.com). They offer a daily menu (7 Sol), which includes soup, bread, salad from a buffet, a main course and tea. We ate there twice and had quinoa croquettes and Seitan steak. 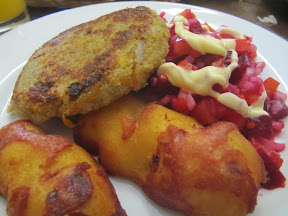 In this restaurant we got to know about The Original Kingdom vegan organization which also operates a global vegan business list, thegoldenpages.info.

To benefit from the hostel's kitchen, we went to the Wanchaq market to buy fruit and vegetables. We made chickpeas and vegetables stew and a pasta sauce. For breakfast we made 27 pancakes out of 6 eggs filled with bananas and 100% cocoa bar we found in the market. As we couldn't finish 27 pancakes, we fed the whole hostel. 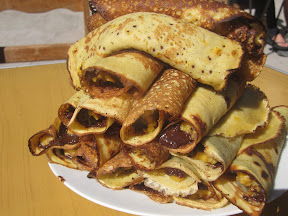 Another great market is the Artesanal Sunday market in Plaza Tupac Amaru, where you can buy traditional candies and arts. 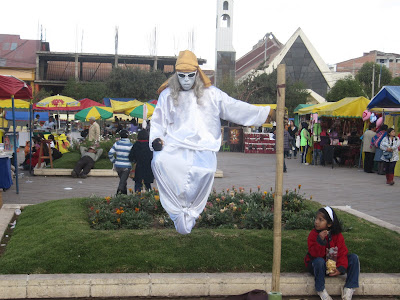 We were happy to find there our traditional cardboard breakfast, of popped wheat, quinoa and rice, and bought 1 kg of popped grains (10 Sol). 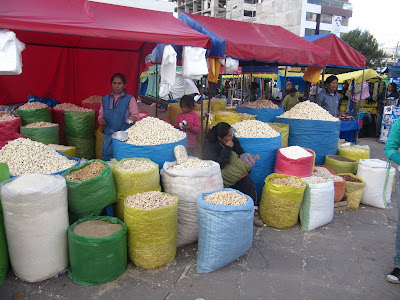 Bus
We chose to get to Lima 2 days before our flight back to Israel, so that we would have time to rest from the 24 hours bus ride. Thanks to the advice of a travel agent, we bought cheap tickets in the bus station itself. We chose Las Flores - Cetur, as they offered a good price (70 Sol) and were willing to take our bikes in one piece (for 20 Sol per bike). In order to take our bikes in a Semi-Cama bus, which is not as comfortable as a Cama bus, but has a much larger trunk. The bus went very slowly in the curved way, which was beautiful and made us regret not having cycled a bit further, to Abancay. 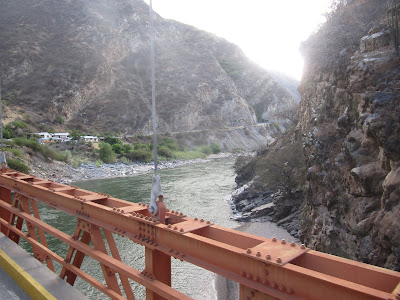 It is only natural that in 15 hours of curves we felt sick, until the first and only stop, 2 hours before Lima. 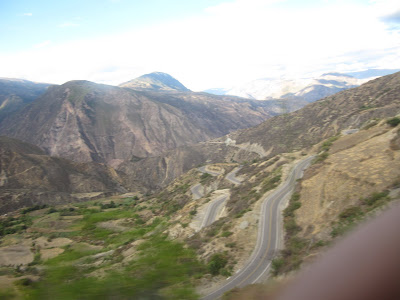 Lima
In Lima we just walked with our bicycles by our sides, until we found a hostel (Renovacion 490, 12 Sol for a room). The owner was very nice, and let us pack our bikes in the living room. To do that we had to buy bicycle boxes from one of the many bicycles shops in Huascaran street. Just one shop had good boxes (20 Sol). After packing the bicycles we had a day to explore the city. We went to Plaza de Armas, and visited the palace, and skipped everything else because the entrance costs money. 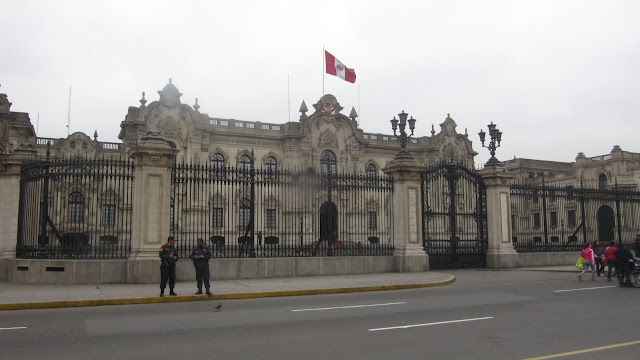 Shoham had a huge ice cream (5 Sol), and we tasted many freshly squeezed fruit juices they sell on street stands: orange, ananas and sugar cane. For dinner, we ate a vegetarian meal in a Chinese restaurant. 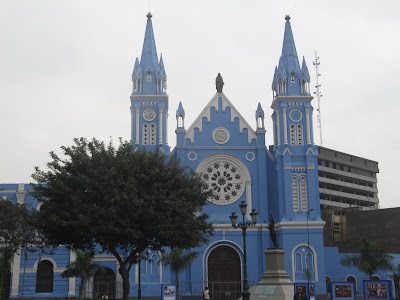 Then we went to the Circuito Magico del Agua (4 Sol) in Parque de la Reserva, near the newly built soccer stadium. There we enjoyed the various fountains, and watching the music, water and laser show. 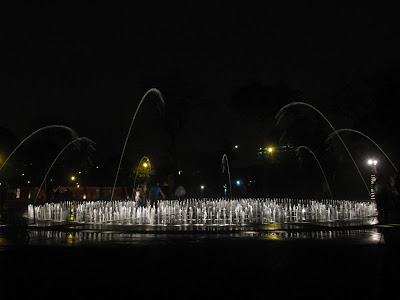 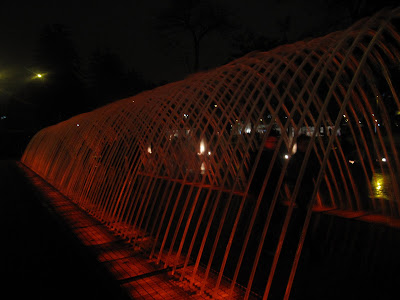 Airport
On the day of the flight we had a delicious breakfast of fruit salad and popped wheat. After completing the packing of our stuff, we went out to take out money and change it into Euros, because were going to spend some time in Madrid between flights. For the last time in South America, we ate in a restaurant (menu for 4.5 Sol), and drank some orange juice. To get to the airport we stopped a taxi (20 Sol) with a talkative driver. 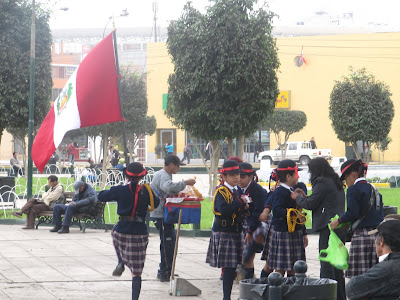 At the entrance to the airport, there was a scam of 2 people who made us pay them to put nylon all over our boxes, wit h the excuse that by a new airport regulation, we were obligated to do that. We asked a policeman to interfere, but he cooperated with them. We managed to bargain and paid only 10 Sol (that was all we had left) instead of the 40 Sol they wanted. When we got to the check-in point, we were of course the only ones with nylon on their boxes, but maybe this was the reason Iberia didn't charge us for flying our bicycles (75 USD + taxes), or for the huge overweight we had (40 kg).

Madrid
After a pleasant flight, during which we mainly slept and ate, we landed in Madrid. 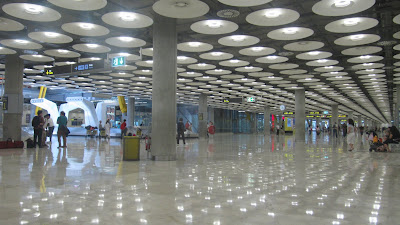 When we got to the center by metro (2 Euro), we still had 9 hours until the flight to Israel, so we could explore Madrid a bit. We walked through the beautiful Retiro park, and enjoyed the sun and the clean and quiet streets of Madrid (it was Saturday). 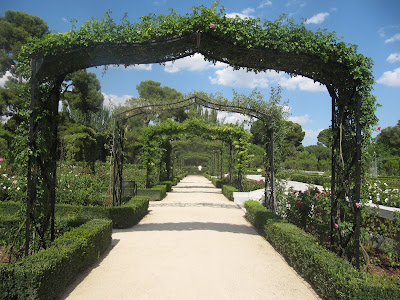 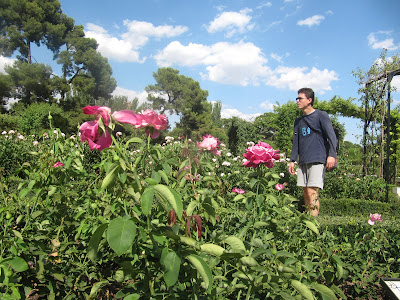 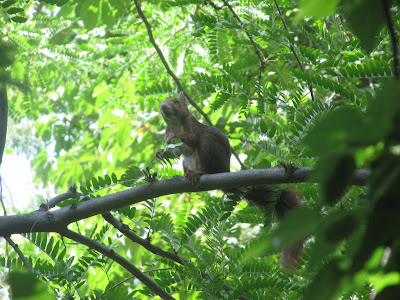 We took a train to Tres Cantos, where we met Lyke and Bill, friends of Shoham's parents. It was refreshing to sit with them, swim in their pool and have a great meal. We had olives, Gaspacho, potatoes, chicken, salad and for desert fruit salad with ice cream. This was our last non-vegan meal as in Israel we will go back to being vegan. They brought us back to the airport, where we felt like businessmen, arriving at the airport only an hour before taking-off, with no luggage to check in. 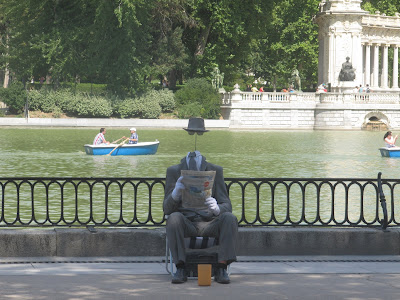 This flight was more difficult for us - although it was a night flight, by South America time, it was day and we couldn't sleep. Moreover, there was no movies to help us pass the time. Somehow, however, in this flight we did get the vegan flight we ordered in Lima. 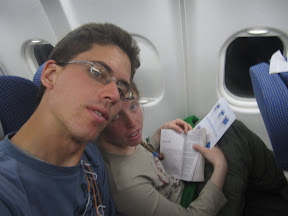 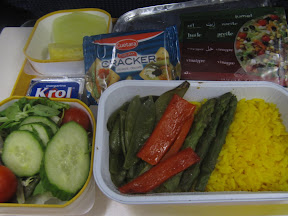 Back in Israel
Just before landing, we remembered that we left our Israeli passports in our backpacks we checked in. So we had to argue with the border police so that they would let us in with our foreign passports. 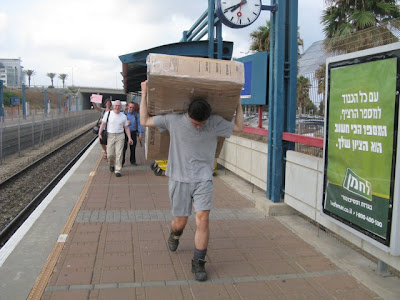 The bicycle boxes were already waiting for us in the luggage hall, and the backpacks arrived immediately. After half an hour, we were already on the train to Haifa, and when we got off our whole family waited there for us. 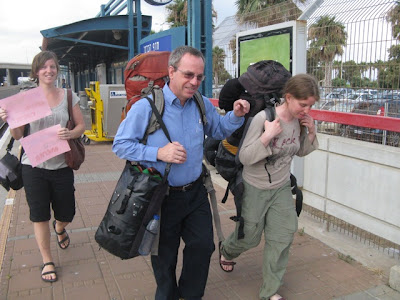 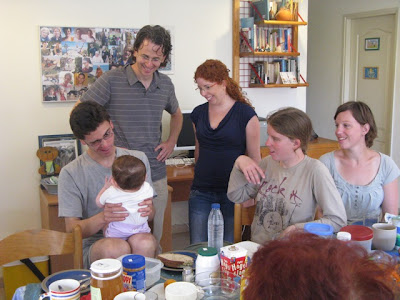 If you wish to get an email whenever a new post is published send us a request to:
SHOHAMIT@Live.com
with the subject:
"South America by Bicycles"